Why I care so much about anxiety and depression at work

How I came to be a workplace mental health specialist

Over the last few years, mental health has become a big part of my life as I continually struggled with anxiety and depression at work.

It started out with me working hard to manage my mental health while also trying to thrive in my role as Head of Communications at a major household name. After hitting burnout in Summer 2017 I made some tweaks to my work to help me manage my anxiety and depression. I started work slightly later in the morning, worked from home one day per week and worked hard at learning to delegate and give my team room to breathe.

These changes just didn’t cut it and by March 2018 I’d had a breakdown and was signed off work for three months.

During that time I started seeing my third therapist and took the decision to start a course of anti-depressants – which I’m still taking.

Anxiety and depression at work

When I went back to work in June that year I was still pretty broken. My employers were very supportive and hadn’t blinked at the time I had taken off. I was lucky that I had private healthcare, a really supportive team and a good relationship with my manager and HR contact.

However, there were small things that had a huge impact on me. On my first day back at work, I had to clear through three months’ of emails; had to ask for a new password; didn’t know where to sit; wasn’t sure what to say to anyone. That first day back could have been made a lot smoother and less anxiety-inducing with some small changes, that wouldn’t have cost the company anything.

Eight months later when I took redundancy from that role, this was the genesis of mad and sad club. The idea that companies are well-intentioned, but a little clueless when it comes to how to support people in managing their mental health at work.

When Jo came back to work after having time off, I could tell how difficult it was for her. Our offices are pretty big, pretty noisy and the most difficult part of all - WE HOT DESK. Finding a space to sit can be difficult and awkward on a regular day because of how busy the office is, so I can only imagine how tough it was for Jo walking into the office on her first day back. I remember when Jo came over to my desk, I just hugged her, what else was I to do? I'm fairly seasoned with this stuff as someone who has struggled with anxiety myself, but what if you're not used to these situations? There isn't any advice given to employees on returning to work but also for employees welcoming back a member of their team that has been off. 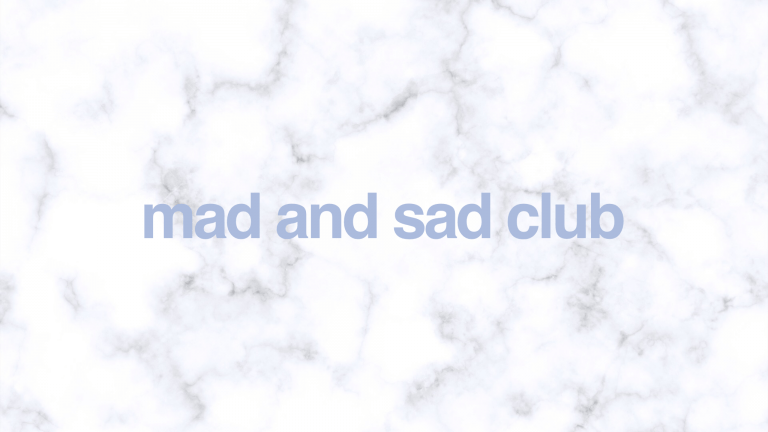 The workplace can be hugely triggering for people struggling as I was, with anxiety and depression at work.

For me, work gave me huge validation and was the cornerstone of my confidence and self worth. So when my performance at work began to dip as I got more unwell, it had a hugely damaging impact on my already fragile mental health and my toxic perfectionism (a phrase coined by my second therapist – thank you!) was out of control.

I was deep in the well of anxiety and depression and it took me the best part of a year to get out of it.

After I returned to work and was on a more even keel, talking about my mental health at work became more and more important to me. Initially, I felt that I couldn’t NOT talk about it as it was so obvious that my mind was the reason I hadn’t been seen for three months.

I was open with my team about how I’d felt, where I was at and my limitations. I was honest that I needed to work in a different way, a way I felt would make me a better manager. I would need to delegate more (which wouldn’t be difficult as my control freak tendencies made me quite the micro-manager previously); give them more responsibility and ask them to take more decisions on their own.

Changing the way we worked together had almost immediate positive effects on me and the team.

But it wasn’t all about work. In being honest about how I was feeling, we started to build a braver, more open culture in our team. Other people were starting to open up when they were reaching the point of overwhelm. I started to confront people I was worried about and use my experiences to empathise and suggest a course of action.

By the time I left, I think we had built an open, honest, and ultimately more healthy team – it’s something I’m incredibly proud of.

When Jo got more confident with being back at work, she started to open up about how she was feeling and what she had been through. Not only did it help us to understand Jo better but it also created a team culture that we didn't previously have. The first time Jo openly spoke about her mental health in our team meeting, I'll admit it felt slightly awkward ... we had never had a discussion like this before. Fast forward a few months and talking about mental health at work was something that I was pretty comfortable with. Without Jo instilling that culture in the team, I'd probably still keep it bottled up when I've having a difficult bout of anxiety but now, I'm happy to ask for help and funnily enough, the anxiety becomes less frequent!

Professionally, I was in a position to start to take action on the way talked about mental health in the workplace. I encouraged the team to mark major awareness days and weeks and made sure we supported the HR team when we signed the Time to Change pledge.

However, pledges and policies only get you so far.

The thing that made the single biggest difference to the culture around mental health in the organisation was sharing my story widely. I wrote this article, which was shared on our intranet in the lead up to World Mental Health Day last October and it started to spark a conversation.

That conversation led to us setting up a Feel Good Champions network to provide peer support; to me providing coaching and support to other managers unsure about how to approach someone they were worried about; to others being open about their mental health issues. On Time to Talk day in February, another member of staff shared their first person story, which encouraged a flurry of engagement and openness.

I was proud of what I helped to achieve there.

Now I want to use my lived experience, my professional capabilities as a senior leader and communicator to help organisations help their staff. If this is something you’re passionate about, get in touch – together, let’s take action on mental health at work.

If you want to stay up to date with news, views and pick me ups, join the club here or click on the image below.

Is there a mental health epidemic in the Comms industry?

Starting with why – working in mental health

Finding contentment in the Surrey Countryside